Today’s song was written by Charles DeForest, one of New York’s preeminent cabaret singers and pianists, who performed in Manhattan nightclubs for more than forty years. His songs were performed by Tony Bennett, who was one of his great champions, and other singers including George Shearing and Blossom Dearie. Mr. DeForest died in 1996; his obituary from the New York Times may be read here.

Tony Bennett first recorded this song in 1989 for his autobiographical album Astoria: Portrait Of The Artist. In this album, Bennett explores his life after he returned home to Astoria from World War II and studied, practiced and studied and then practiced and studied a lot more in his quest to become a singer. I find this album quite moving and I listen to it often; it’s not always easy to look back on your life and revisit the past. Bennett does it quite brilliantly here.

I also find this album an interesting counterpoint to his 1959 album Hometown, My Town, which is another favorite of mine. Here is our young man experiencing the excitement of Manhattan as he wonders about and plans for his future. And then, thirty years later, he takes on this trip to his past. If you have some time to be reflective, it’s interesting to listen to these albums in a single sitting.

http://open.spotify.com/track/1m1Zt0FKHaXYAYllzshFQt
“When Do The Bells Ring For Me,” as well as the album Astoria: Portrait of the Artist, is available from iTunes and Amazon.

I also want to show you the back cover of the album … it’s really striking to be able to view them both. 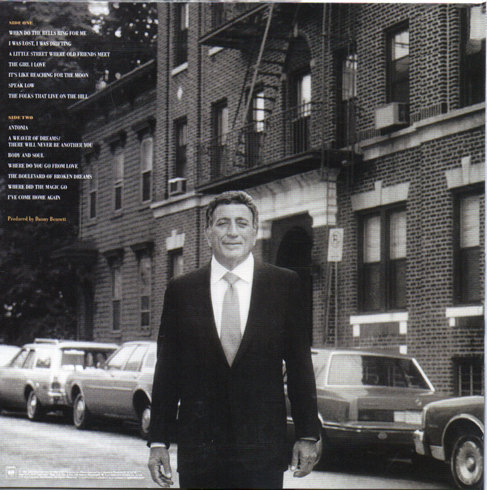 And, as it’s what I’m now calling YouTube Saturday, here’s a video from the Tony Bennett Vevo Channel of our song, the video of which is a charming (and sometimes funny — see 2:06 for an example) look at Bennett’s performing career.